Getting Two-Dimensional in Classical Music: Piece and Harmony

Now, if melody were the only worthwhile component of classical music, humans would be born with only one finger. But music, even on the page, has more than one dimension. At any moment, you hear more than the melody note; underneath, you hear a specific group of additional notes that form the harmony — the chord.

To identify a harmony for sure, you need at least three notes played simultaneously. Fancy jazz chords may have four, six, or even more — but three notes is the minimum.

You can create hundreds of different chord types; just drop your hand on a random glob of piano keys, and your local jazz-bar pianist can happily tell you its name. It may take him 35 minutes to get through saying its name — “That’s an E-flat minor seven with a diminished fifth over D” — but he’ll do it.

Fortunately for the classical-music lover, however, the great majority of chords used in classical music fit into two types: major and minor.

To build a chord, you first choose the bottom note — the root. For this example — especially if you have a piano nearby — choose middle C. Already, you know the first part of this chord’s name; it’s going to be a “C-something.”

To choose the other two notes of this chord, you can call upon your existing knowledge of intervals. You make a major chord by adding two notes: a major third above the root note and a fifth above the same root note. On the piano, this chord looks like the diagram shown on the left.

The chord you just played is called the C major chord. Any piano player on the planet will smile at you in instant recognition if you say “C major” at a post-concert get-together. Said pianist may be even more impressed if you call it a C major triad, because it does, after all, contain three notes. (If you just say “C chord,” by the way, people assume that you mean “C major chord.”)

Now then, if you lower the middle note so that it’s a minor third above C instead of a major third, you get the configuration shown on the right. This chord is called, of course, a C minor chord.

In your musical life, you’ll eventually hear about other kinds of chords: diminished, half-diminished, augmented, dominant seventh, and so on. Each has a characteristic sound, each contains notes at specified intervals above the root note, and none is used nearly as frequently as the major and minor types you just created.

Now, listening to an entire piece of music where the harmony never changes would be boring indeed.

Therefore — in classical music at least — the usual course of events is for the harmony (chord) being played underneath the melody to change every couple of seconds. Musicians call this string of changing chords a harmonic progression (or a chord progression).

What’s really hilarious is that certain chord progressions are so natural-sounding that they’ve been used over and over again throughout history. “Blue Moon,” “Heart and Soul,” “Stand by Me,” and “Stay Just a Little Bit Longer,” for example, as well as hundreds of other songs, all have this chord sequence: C major, A minor, F major, and G major — and back to C.

Okay, it was a lie. It turns out that “Blue Moon,” “Heart and Soul,” and “Stay Just a Little Bit Longer” have that C major–A minor–F major–G major chord sequence only if you play them all in the key of C. And if you dig out your old recordings, you’ll discover that they weren’t all played in the key of C; some were played higher or lower to suit the voices of the teen idols who sang them.

If C is your starting note, for example, you can assign Roman numerals. 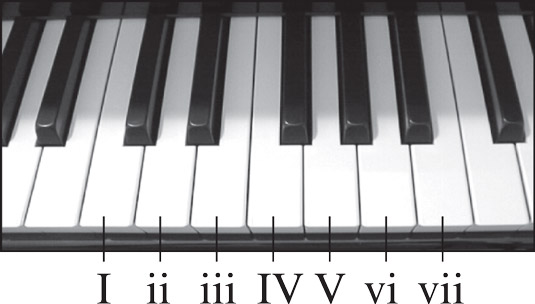 Now, using these same Roman numerals, you can shift the music into other keys. Whether you sing one of those 1950s hits in the key of C, B-flat, F-double-sharp, or whatever, the Roman numerals of those chords are always the same: I, vi, IV, V, I. That particular pattern brings a smile of warm familiarity to campfire folk guitar players the world over.

Listening to the oldies

So what does all this have to do with classical music? Well, you can apply these handy Roman numeral harmony labels to any piece ever played. Although the chord sequences aren’t quite as predictable as they were in the ‘50s, certain familiar patterns do emerge.

A huge majority of classical music pieces, for example, end with the same two chords: V-I. (That’s “five-one,” if you’re reading aloud.) In the key of C major, V-I means the G major chord followed by the C major chord. If you can fake these two chords at a piano, they should sound familiar.