You can test for an average difference using the paired t-test when the variable is numerical (for example, income, cholesterol level, or miles per gallon) and the individuals in the statistical sample are either paired up in some way according to relevant variables such as age or perhaps weight, or the same people are used twice (for example, using a pre-test and post-test).

Paired tests are typically used for studies in which someone is testing to see whether a new treatment, technique, or method works better than an existing method, without having to worry about other factors about the subjects that may influence the results.

For example, suppose a researcher wants to see whether teaching students to read using a computer game gives better results than teaching with a tried-and-true phonics method. She randomly selects 20 students and puts them into 10 pairs according to their reading readiness level, age, IQ, and so on. She randomly selects one student from each pair to learn to read via the computer game method (abbreviated CM), and the other in the pair learns to read using the phonics method (abbreviated PM). At the end of the study, each student takes the same reading test. The data are shown in the following table.

The notation for the null hypothesis is

(The d in the subscript just reminds you that you’re working with the paired differences.)

The formula for the test statistic for paired differences is

sample, and tn–1 is a value on the t-distribution with nd – 1 degrees of freedom.

is unknown, so it’s estimated by sd.

To calculate the test statistic for paired differences, do the following:

For the reading scores example, you can use the preceding steps to see whether the computer method is better in terms of teaching students to read.

Is the result of Step 4 enough to say that the difference in reading scores found in this experiment applies to the whole population in general? Because the population standard deviation,

is unknown and you estimated it with the sample standard deviation (s), you need to use the t-distribution rather than the Z-distribution to find your p-value. Using the below t-table, you look up 1.36 on the t-distribution with 10 – 1 = 9 degrees of freedom to calculate the p-value. 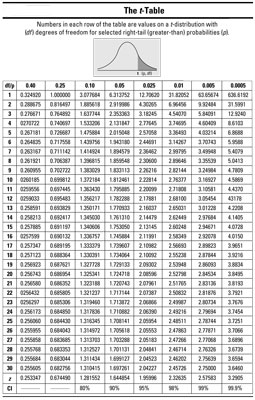 Because the p-value is greater than 0.05, you fail to reject H0; you don’t have enough evidence that the mean difference in the scores between the computer method and the phonics method is significantly greater than 0. However, that doesn’t necessarily mean a real difference isn’t present in the population of all students. But the researcher can’t say the computer game is a better reading method based on this sample of 10 students.

You might ask, “Hey, the sample mean of the differences is 2.0 which shows that the computer method was better than the phonics method . Why did the hypothesis test reject H0 since 2.0 is obviously greater than 0?” Because in this case, 2.0 is not significantly greater than 0. You also need to factor in variation using the standard error and the t distribution to be able to say something about the entire population of students.