This definition seems a little bewildering, but the idea isn't nearly so complicated. This figure is simpler to interpret. 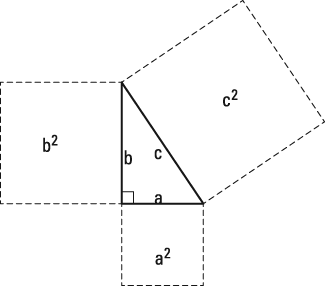 An example of the Pythagorean theorem.

In symbols, this relationship is stated even more compactly. If a and b are lengths of the legs of a right triangle and if c is the length of the hypotenuse, then

Two of the most common errors students make as they become accustomed to using the Pythagorean theorem are thinking that a + b = c, and forgetting that the sum of

is the square of the length c. You can lessen the likelihood of each of these errors by sketching a diagram such as the one in the first figure, with numbers substituted for the numbers in the problem you're working. This diagram helps focus your attention on the relationship between the side lengths of the triangle and the areas of the squares.

Eighth graders learn a proof of the Pythagorean theorem. The next figure shows two big squares with the same area.

A proof of the Pythagorean theorem.

The key to this proof is that the only thing special about the triangles is that they're right triangles.

The converse starts with a triangle whose sides have the relationship

and concludes that the triangle is right.

One final word about the Pythagorean theorem: The relationship

and if it's an obtuse angle, then the opposite is true. The sum of the areas of the first two squares will be less than the area of the third one.

(as you can see in the next figure). 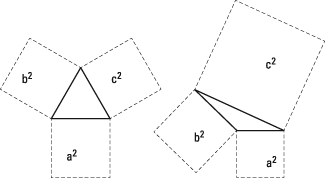 Notice that a2 + b2 doesn't equal c2 in these triangles.