To learn Common Core geometry, a kindergarten student begins by studying shapes that she finds in her world. Nearly all children will come to school with ideas about what shapes look like and basic names for shapes. Kindergarteners spend time trying to describe shapes precisely.

A student entering kindergarten may think of squares and rectangles as unrelated shapes. Several reasons may explain this way of thinking. Many shapes books for young children have separate pages for squares and for rectangles. Some of these books even emphasize (incorrectly) that a rectangle has two short sides and two long sides. Children may have absorbed these messages. Additionally, as young children identify shapes and the corresponding vocabulary, they may notice that adults tend to use the words square and rectangle to describe different things.

Kindergarteners learn to identify the differences between squares and rectangles. When studying geometry in kindergarten, they focus on what squares and rectangles have in common. For example, they each have four sides. They can then understand that a square is also a rectangle, not a completely different kind of shape (but don't worry if your kindergartener struggles with this idea and continues to insist that a postage stamp is a square and not a rectangle — this relationship is a challenging one for young minds).

Another important concept that kindergarteners develop by describing shapes precisely is that the orientation of a shape doesn't matter. A square is still a square, even when it's standing on its corner, as this figure shows. 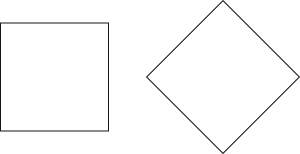 Both shapes are squares.

Children commonly think of the shape on the left as a square and the figure on the right as a diamond because they usually see squares presented with a horizontal base, while nearly all four‐sided figures presented with a vertex at the bottom of the page are called diamonds. This is true in most shapes books, and in everyday conversation. It's even true in sports. Have you ever wondered why it's called a baseball diamond and not a baseball square?

Sit down at a table next to your kindergartener. Have something square shaped handy, such as a sticky note or a postage stamp (don't use a square drawn on a piece of paper because then the paper serves as a reference for the square's orientation). Ask your child what shape the sticky note is. Then turn the sticky note a little bit so that one vertex is closest to you and ask whether it's still a square. Alternatively, you can ask what shape it is now. In another version of this activity, you can put a square on the floor and view it together from a number of different angles. In the first activity, the square changes orientation. In the second one, the square stays put and you change orientation. This difference may matter to your child.

Don't worry if your child responds in ways that aren't mathematically correct (for example, if she says that the sticky note is no longer a square when it stands on its point). This activity is intended to help you listen to your child's mathematical ideas and to help her think about whether the shape's orientation matters. In fact, don't be surprised if she comes back a few days or a week later to tell you something new about tilted squares; children often think about this kind of conversation long after you (or the teacher) have forgotten it.