In eighth grade Common Core math, students studied similar figures. In high school, they use the properties of similarity to study new things, in particular, trigonometry. 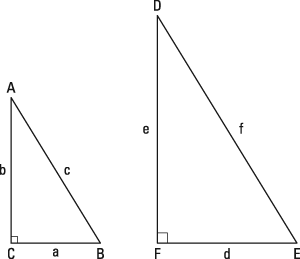 are fixed, and their value depends on the measure of the angle at A (and at D, which is the same measure because the triangles are similar). This ratio is sin (A), which you read as sine of A.

Because the ratios of sides of right triangles were figured out long ago and because these ratios are extremely useful for measuring things, the relationships between angle measures and the ratios of sides of the corresponding right triangles have been given names. Sine, cosine, and tangent are the main ratios, but secant, cosecant, and cotangent are similarly defined.

Trigonometry is the study of these functions. The Common Core State Standards don't have a separate set of trigonometry standards. Instead, students study the trigonometry functions as part of their work in geometry — whether in a dedicated geometry course or in an integrated math program across several grades. Either way, a typical precalculus course extends the study of these ratios to angle measure values that don't make sense in right triangles, such as negative numbers and numbers greater than 90 degrees. The Common Core State Standards don't include precalculus standards, so they contain only the right triangle trigonometry that is described here.