In math, there are many kinds of sameness. In Common Core geometry, eighth grade students study congruence and similarity as two ways of talking about how two shapes are the same.

Two shapes are congruent if you can move one so that it perfectly matches the other one without stretching or deforming it. Two shapes are similar if you can do the same thing, except that you're allowed to stretch or shrink the shapes proportionally — you can double all the lengths on one of the shapes, for example.

Eighth graders need to carefully specify the size of the rotation (measured in degrees or in fractions of a full turn) and the distance of the slide (measured in any linear units, such as inches or centimeters) necessary for moving one shape so that it matches up with a congruent one. They also need to identify precisely the factor by which a shape needs to be stretched or shrunk to match a similar shape.

For example, look at the figure and determine which are the same. 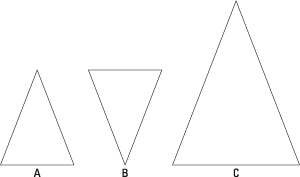 Examine these triangles to see which are the same.

In this example, only triangles A and B are congruent. But triangle C is similar both to A and to B. So which shapes are the same? It depends on what you mean by same. This confusion is why mathematicians use the words congruent and similar — the meanings of these words are much more precise than the meaning of same.