Math students add and multiply fractions in Common Core fifth grade. These skills require using and extending their knowledge of these operations from their earlier work with whole numbers.

When adding two numbers, fifth graders need to express the same units. Three miles plus four gallons doesn't give you seven of anything because the units are different, which is true with adding fractions, too. When students get to fifth grade, they have a lot of experience with unit fractions. A unit fraction is a fraction with a 1 in the numerator, such as

The unit in unit fraction refers to the 1 in the numerator. But a unit fraction is also a unit just like other units of measurement. A mile is a unit, a gallon is a unit, and a fourth is a unit. It's helpful for students to think about

as three fourths, just like they think of three miles and three gallons. This can remind them that

and — more generally — that adding fractions requires common denominators because you need to add same-sized units.

Students draw pictures to solve problems like in this figure that involve parts of parts. 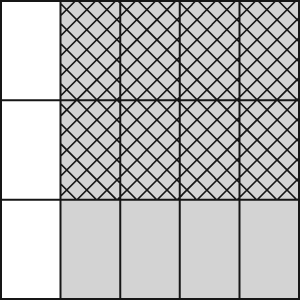 You can see the doubly shaded

in the upper-right part of the diagram.

This product refers to a fraction of the original whole — the square in the figure.