The best way to see how this theorem works is with a visual example:

A definite integral and its mean-value rectangle have the same width and area.

This region obviously has a width of 1, and you can evaluate it easily to show that its area is

so the top of this rectangle intersects the original function.

The fact that the top of the mean-value rectangle intersects the function is mostly a matter of common sense. After all, the height of this rectangle represents the average value that the function attains over a given interval. This value must fall someplace between the function’s maximum and minimum values on that interval.

Here’s the formal statement of the Mean Value Theorem for Integrals: If f(x) is a continuous function on the closed interval [a, b], then there exists a number c in that interval such that:

This equation may look complicated, but it’s basically a restatement of this familiar equation for the area of a rectangle:

In other words, start with a definite integral that expresses an area, and then draw a rectangle of equal area with the same width (b – a). The height of that rectangle — f(c) — is such that its top edge intersects the function where x = c.

The value f(c) is the average value of f(x) over the interval [a, b]. You can calculate it by rearranging the equation stated in the theorem:

For example, here’s a figure that illustrates the definite integral 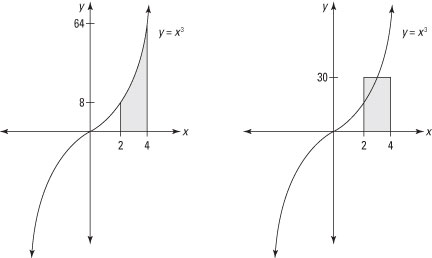 Now, here’s how you calculate the average value of the shaded area: 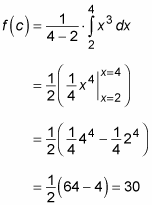 Not surprisingly, the average value of this integral is 30, a value between the function’s minimum of 8 and its maximum of 64.