How to Measure Circles 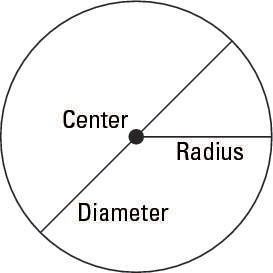 As you can see, the diameter of any circle is made up of one radius plus another radius — that is, two radii (pronounced ray-dee-eye). This concept gives you the following handy formula:

For example, given a circle with a radius of 5 millimeters, you can figure out the diameter as follows:

The symbol π is called pi (pronounced "pie"). It's just a number whose approximate value is as follows (the decimal part of pi goes on forever, so you can't get an exact value for pi):

So given a circle with a radius of 5 mm, you can figure out the approximate circumference:

The area of a circle

The formula for the area (A) of a circle also uses π:

Here's how to use this formula to find the approximate area of a circle with a radius of 5 mm: