Isolate an Unknown Variable in an Algebraic Equation

Life isn't always as easy as one-variable equations. Being able to solve an algebra equation for some variable when it contains more than one unknown can be helpful in many situations.

If you're repeating a task over and over — such as trying different widths of gardens or diameters of pools to find the best size — you can solve for one of the variables in the equation in terms of the others.

For example, the equation

is the formula you use to find the area of a trapezoid. The letter A represents area, h stands for height (the distance between the two parallel bases), and the two b's are the two parallel sides called the bases of the trapezoid.

If you want to construct a trapezoid that has a set area, you need to figure out what dimensions give you that area. You'll find it easier to do the many computations if you solve for one of the components of the formula first — for h, b1, or b2.

To solve for h in terms of the rest of the unknowns or letters, you multiply each side by two, which clears out the fraction, and then divide by the entire expression in the parentheses: 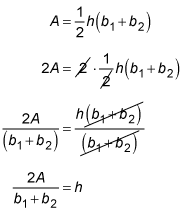 You can also solve for b2, the measure of the second base of the trapezoid. To do so, you multiply each side of the equation by two, and then divide each side by h.

Next, subtract b1 from each side of the equation.