10 Ways of Dealing with Tough Guys in Your Small Business 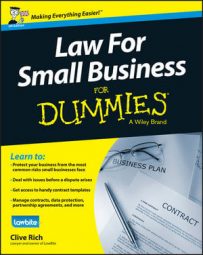 Explore Book Buy On Amazon
The business world is full of "tough guys," and it's likely the day will come when you need to know how to recognize the tell-tale bullying behavior, and how to handle it. So here's your guide to dealing with these bullies — a skill that's sure to help you achieve your goal of becoming a successful entrepreneur.

You can come across tough-guy trading partners in your contractual negotiations and tough guys in disputes, as well as tough-guy investors and tough-guy lawyers. Tough-guy behavior can consist of threats, hostility, complaints, unreasonable deadlines, and many other forms of pressure. Most such behavior is done on purpose, as a manipulative approach designed to make you feel bad and put pressure on you.

The best approach is to make their behavior the issue. Stop the discussion and don't continue until the bad behavior has been raised and addressed. After you make it clear that you know what's going on, they're likely to drop the tactic.

Some people find this advice puzzling and feel that they ought to be 'professional' and ignore the bad behavior, perhaps sending an "I'm not going to stoop to that level" message. But if you allow tough guys to get away with their bad behavior, they just keep doing it, making it harder and harder for you to get what you need from the situation.

Also, watch out for tough guys who claim that they're being "very fair" or "totally reasonable." Usually, it's a smoke screen to mask their extreme positions. Ask them what they mean by "fair" — that stumps them. Or walk through the issue: "It's not a question of who's being reasonable, I need "x." What can you do for me?" Game, set, and match.

If someone is threatening you, you don't have to sit there and put up with it. You normally have a choice as to how you make the person's behaviour the issue. You can say, "We don't do business on the basis of threats, shall we start again?" If that sounds too confrontational, try, "How would it be if neither of us threatens the other in this discussion?" or "Correct me if I'm wrong, but isn't the atmosphere rather hostile?" Much gentler.

Normally, threat-makers back off when you draw specific attention to their behaviour. Responding in this way may sound a bit frightening, but you have to do it only once — and it's almost certainly better than having to deal with the prospect of their ongoing and repeated threatening behaviour.

You don't have to take aggressive behaviour. If someone is shouting at you or being hostile while you're negotiating a deal, you can handle it.

You can say, "Why is the atmosphere so hostile" — that often does the trick. Too blunt for you? How about, "Can I just check we're all agreed that neither of us is going to be hostile to the other?" Or you can ask them what they'd do if they were in your shoes and feeling very uncomfortable with the ferocity of the climate. That might lead them to change their behaviour.

Sometimes so-called tough guys make personal attacks on you to undermine your state of mind and make you feel anxious. They may comment on your competence, seek to undermine your status, deliberately choose to misunderstand you to try and trip you up, keep you waiting, or choose an uncomfortable seating arrangement or a venue where you feel at a disadvantage.

The answer is to make their behaviour the issue. Any of these responses can put them off their stroke, I promise:

Sometimes people put forward complaints opportunistically. They do so to try and gain the moral high ground in the negotiation, regardless of whether the complaint is bogus. If you encounter this approach, confront the person like this: "I propose that you stop asserting this fanciful claim, because the negotiation will go a lot better if it's grounded in reality."

Alternatively (whether you think the complaint is real or not), get the person to repeat it. People often invest their complaints with a lot less energy the second time around, and so this takes the volume down. You can then reduce it further by summarising the complaint yourself ("I see, so what you're saying is . . ."). By then, the complaint is assuming manageable proportions.

You then can cut through it entirely by asking the other side to state its remedy. Doing so often takes the wind out of complainers' sails completely, because if the complaint is bogus, they've been thinking only about how to put you off by moaning, and not about a remedy if the complaint was legitimate.

A lot of people use this tactic, thinking that they're being cunning, but in fact it's just an annoying cliché and can quickly be countered. The "bad cop" tries to beat you up in the negotiation while the "good cop" is reassuring and even disapproving of the bad cop. The good cop then tries to soft-talk you into concessions, the seductive promise being that if you go along with them, the bad cop will leave you alone. Guess what? You can puncture this tactic by making their behaviour the issue by saying:

I'm very confused here. One of you is being very pleasant, and the other is acting all tough. Why don't we stop for five minutes so you two can agree on a common approach. Then we can start again.

That should sort it out. No point in them continuing with the tactic after you've made a statement like that.

Swatting away the salami slicers

The subtle tactic of the tough-guy salami slicer is to keep coming back to you asking for more in a discussion or negotiation — but in such small amounts that you're tempted to agree with them each time, because the person doesn't seem to be asking for much. Salami slicers keep taking slice after slice until you suddenly realise that virtually the whole salami has gone.

The way to overcome this behaviour is to say, "Is that it?" when salami slicers come back for more. If they say "yes," hold them to that agreement. If they say "no," you know they'll be back for more even if you agree to this latest round of concessions. Therefore, you can negotiate strongly on those points without feeling as though you're preventing the deal from closing.

Pressure-merchants try to hurry up your decision, pressurising you into making a mistake or a concession that you wouldn't otherwise make by creating the fear that if you don't decide quickly the opportunity is lost. "Buy while stocks last" is the mantra of these tough guys. To bring it close to home they may say, "If you don't agree now, then I won't invest," or "If you don't concede by 5 p.m., we'll issue legal proceedings." Sometimes, they intensify this sense of panic by ignoring you for a while before and just after they set the deadline, to increase your anxiety that you may not get the deal done.

The best way to deal with deadline pressure is to probe the deadline they gave you. If they tell you the deal must be done by Tuesday, say to them "so does that mean that if you get more of what you want but the deal is done by Wednesday, there won't be a deal?" If they hesitate or give you any kind of conditional response, you know that the deadline isn't real, because if they meant it the only response to that question ought to be an immediate "yes." When you know they don't mean it, their credibility disappears and you can safely ignore the deadline and any other pressure tactics they try to exert. Doing so can end up being a turning point in the discussion.

Facing 'take it or leave it'

"That's my final offer, take it or leave it" is meant to panic you into giving in, worrying that if you "leave it" the deal will vanish. As so often with tough guys, a good response is to probe the ultimatum to see whether the person means it. For example, you can say, "So, are you saying that if there was 1 pound of difference between your current position and the final outcome, you wouldn't want to do the deal?" or "Are you saying that even if we could expand the pie for both of us, you wouldn't be interested?"

If the threat is real, the answer ought to be "yes." Unsurprisingly, however, often if you pose such an extreme question you get back a hesitant or conditional answer: "Well, I'm not saying that, I'm just saying that we need the main terms agreed in our favor" (or some such variation). As soon as you receive that signal, you know that room for negotiation remains and the ultimatum isn't as real as it sounds.

This tactic is a favorite of pressure-salespeople. They try to short-circuit a negotiation by getting you to reveal your bottom line, with the intention that the negotiation travels straight to that point. Unscrupulous dealers ask you this question with a view to finding out the most that you'll spend and give you options at or just above that price rather than cheaper alternatives within your bottom line.

A good tactic is to walk through the question: "It's not a question of what my bottom line is; just tell me what purchase options you have." That parks their tactic in a safe place and gets the discussion onto something you want to discuss.

Responding to 'improve your offer'

Sometimes you can make an offer and instead of replying with a proposal of its own, the other side simply asks you to improve your offer: "That's not good enough . . . we need a better price than that." But they don't tell you what they actually want.

You may feel obliged to respond to this with an improved offer, but in fact they're just trying to make you improve your proposal still further, without needing to make any concessions of their own. This is a sneaky way to win cheap points off you, because if you make further improvements in your proposal you have no idea whether or not they're going to prove acceptable. Nothing necessarily stops them insisting again that you need to improve your offer. At that point you've completely wasted any further concessions you made.

If somebody makes a vague, general demand that you improve a proposal, the best response is to make them be specific. A good answer is "What would it take to reach agreement, then?" Don't make any further proposals until they answer that question. When they've told you, at least you have some benchmark against which to evaluate what you want to do next. Maybe you want to improve your offer, propose movement on both sides or stand firm. But at least you know where you are. In telling you what you need to do in order to reach agreement, they may even make some extra concessions, taking them further towards your initial suggestion.