The Art of American Realism 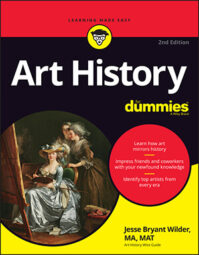 Some American artists followed traditions developed in Europe; others preferred homegrown styles. Realism — painting that is grounded in the ordinary and captures day-to-day life — was a natural for pragmatic Americans, especially when it celebrated majestic natural scenery or rural pleasures like boating and fishing or paintings of the sea.

Albert Bierstadt (1830–1902) was born in Solingen, Germany; grew up in New Bedford, Massachusetts; returned to Germany for four years to study painting; and came back to the United States to paint.

Bierstadt's specialty was spectacular mountain scenery. He made sketches and took photos of the scene, often in treacherous and dangerous locations. From these photos, he painted his awe-inspiring landscapes. For example, he headed west with an expeditionary party in 1859 and, in the summer of 1861, sketched in Eastern Shoshone country in the Wind River region of Wyoming.

In The Rocky Mountains, Lander's Peak (housed at the Metropolitan Museum of Art in New York City), he works the natural sunlight to highlight pieces of the landscape as if he were shining spotlights on them. Although Native Americans and animals populate the foreground and middle ground of the painting, they don't project any personality — they're simply local color and ambience. It's the light in the painting that has personality.

Bierstadt always went for the long, wide shot, so to speak, and never the intimate close-up.

The earliest paintings of Winslow Homer (1836–1910) are of the Civil War, which he covered as a pictorial reporter (sketcher) for Harper's Weekly in 1862. After the war, he studied in Paris for a year (in 1867), but it doesn't appear that he absorbed much from the French Impressionist movement, which was coming into its own at that time. In fact, after he returned to the United States, Homer painted mostly realistic scenes of happy rural life, many of them of pastoral figures in sun-drenched landscapes. He began experimenting with watercolors and soon mastered the medium to become one of the greatest watercolor artists in history.

Homer's best paintings are watercolor seascapes done primarily in the 1880s in Maine. Man against nature is the "Maine" theme that runs through most of his sea paintings. In Homer's Summer Night (which is kept at the Musée d'Orsay in Paris), silhouetted figures ensconced on black rocks gaze at a glassy sea. Two women in evening gowns — one with a wistful expression — dance solemnly on the shore as if to the music of the crashing waves, but the other figures take no notice of them. The glorious scene entrances them.

Boating through America with Thomas Eakins

Like Winslow Homer, Thomas Eakins (1844–1916) studied in Paris in the 1860s. But he stayed much longer than Homer and appears to have absorbed more art styles.

His most famous paintings are of boat racers. In The Biglin Brothers Racing (kept at the National Gallery of Art), he captures a sense of cinematic action. You feel the effort of the rowers, yet the scene is peaceful. The tension between rowing and the surrounding serenity of nature gives the painting its power and interest.

But Eakins was more than a boat painter. He was a very versatile master of many genres. His Agnew Clinic, a painting of a surgical operation performed on a woman before an auditorium of medical students (reminiscent of Rembrandt's famed Anatomy Lesson), is a probing study of character. He examines the personalities of the medical students as carefully as the surgeons examine the body on the operating table.

Jesse Bryant Wilder is the founder, publisher, and editor of NEXUS, a series of interdisciplinary textbooks used in high schools around the country. He has written several textbooks on art and art history and was an art critic for The Plain Dealer and Cleveland.com.