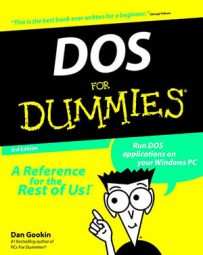 Explore Book Buy On Amazon
You can protect floppy disks in such a way as to prevent yourself or anyone else from modifying or deleting anything on the disk.

When a disk is write-protected, you cannot alter, modify, change, or delete anything on that disk. And you cannot accidentally reformat it. You can read from the disk and copy files from it, but changing the disk — forget it!

To write-protect a 5-1/4-inch disk, grab one of those tiny tabs that came with the disk in the box. Peel the tab and place it over the notch in the disk, which should be on the lower left side as you insert the disk into the drive (see Figure 1). With that notch covered, the disk is write-protected.

Figure 1: Write-protecting a disk prevents changes to your data.
To write-protect a 3-1/2-inch disk, locate the little sliding tile on the lower left side of the disk as you slide it into the drive. If the tile covers the hole, then you can write to the disk. If you slide the tile off the hole (so that you can see through it), the disk is write-protected (see Figure 1).

To un-write-protect a 5-1/4-inch disk, peel off the little tab. Although this action renders the disk sticky, it's a livable problem. You can un-write-protect 3-1/2-inch disks by sliding the tile over the hole.

Disks must be formatted before DOS can use them, and after they're formatted, you can reformat them. You can format them under two circumstances: when you want to totally erase the disk and all its data or accidentally.

Obviously, you shouldn't erase a disk you don't want to erase. All the data on the disk goes bye-bye. The only way to avoid this situation is to be careful: Check the disk with the DIR command first. Make sure that it's a disk you want to reformat.

Don't be afraid to erase disks. You may have stacks of old disks that you can reformat and use. The data on them may be old or duplicated elsewhere, so reusing the disk is no problem. Here's the FORMAT command you want to use:

That's the FORMAT command, a space, and then A and a colon, which directs the FORMAT command to format a disk in drive A. That's followed by another space and a slash-Q. That line tells DOS to Quickformat the disk. It's very fast.

If DOS refuses to Quickformat the disk, try this FORMAT command:

This command is the same as the last one but with a slash-U rather than a slash-Q. This command tells DOS to unconditionally format the disk. It takes longer than a Quickformat, but it generally works.

Here are two things you cannot do with the DISKCOPY command:

When you copy disks, DOS refers to the original disk as the SOURCE. The disk to which you're copying is the TARGET.

To make a copy of a disk, first write-protect the original, the source. Put your write-protected original in drive A. Close the drive's door latch for a 5-1/4-inch disk.

Type this command at the DOS prompt:

That's DISKCOPY, a space, and then A: twice (which means that drive A is mentioned twice and separated by a space). Press Enter and DOS examines the disk, spews out some technical mumbo jumbo, and then

The drive churns away for a few moments. Then, you're asked to insert the target:

Insert TARGET diskette in drive A: Press any key to continue

Remove the source disk and insert your duplicate disk. Close the door latch if you have a 5-1/4-inch disk. Press Enter.

Take a few seconds to put the original (the "source") back in a safe place. When the operation is complete, you can use the duplicate rather than the original.

This command is faster because you don't have to swap disks.