How to Change Appliance Cords and Plugs

By: Gary Hedstrom and Peg Hedstrom and Judy Ondrla Tremore and
Updated: 03-26-2016
From The Book: How to Fix Everything For Dummies

If an appliance isn’t working, you can replace worn plugs and cords. When replacing the cord on an appliance, it must be as heavy a gauge as the one you’re taking out, especially when an appliance heats up. These appliances must have cords that can resist fire; they have an Underwriters Laboratory (UL) fire rating. Think about the heavy, fabric-wrapped cord on an iron; it’s made to withstand a lot of heat. Next in line come frying pans and electric griddles; they have medium-weight cords. Coffeepots and most appliances with motors have cords that are somewhat lighter because they operate at a much lower temperature. Now compare each of the three types of cords to a common extension cord and you’ll see what we mean. 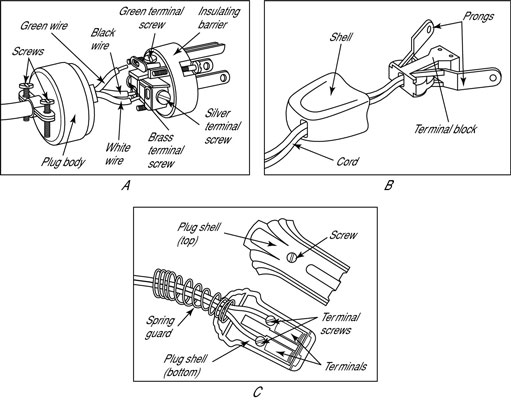 Appliance cords have reuseable plastic outer insulators that hold the cord into the base. To remove the insulator, squeeze it on the inside with pliers until it pushes out of the hole. Take it off the wire and don’t throw it away. Now follow these steps:

Gary and Peg Hedstrom are self-taught repair masters with experience in carpentry, plumbing, appliance repair, and more. Judy Ondrla Tremore is a writer and editor for various newspapers and magazines.