How to Determine the Direction of Angular Velocity

In physics, when a wheel is spinning, it has not only an angular speed but also a direction. Here’s what the angular velocity vector tells you:

Say that a wheel has a constant angular speed,

Can you determine the direction in which its angular velocity,

points? It can’t point along the rim of the wheel, as tangential velocity does, because its direction would then change every second. In fact, the only real choice for its direction is perpendicular to the wheel.

points along the axle of a wheel (as you can see in the figure). 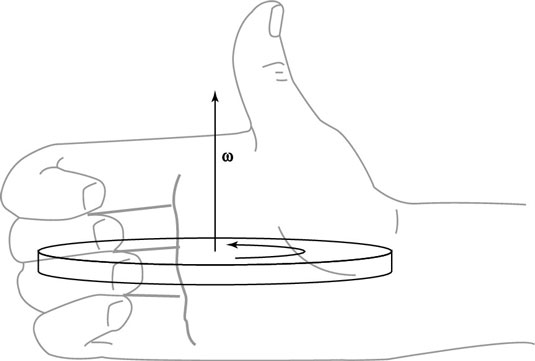 Angular velocity points in a direction perpendicular to the wheel.

The figure shows a wheel lying flat, turning counterclockwise when viewed from above. Wrap your fingers in the direction of rotation. Your thumb, which represents the angular velocity vector, points up; it runs along the wheel’s axle. If the wheel were to turn clockwise instead, your thumb — and the vector — would have to point down, in the opposite direction.