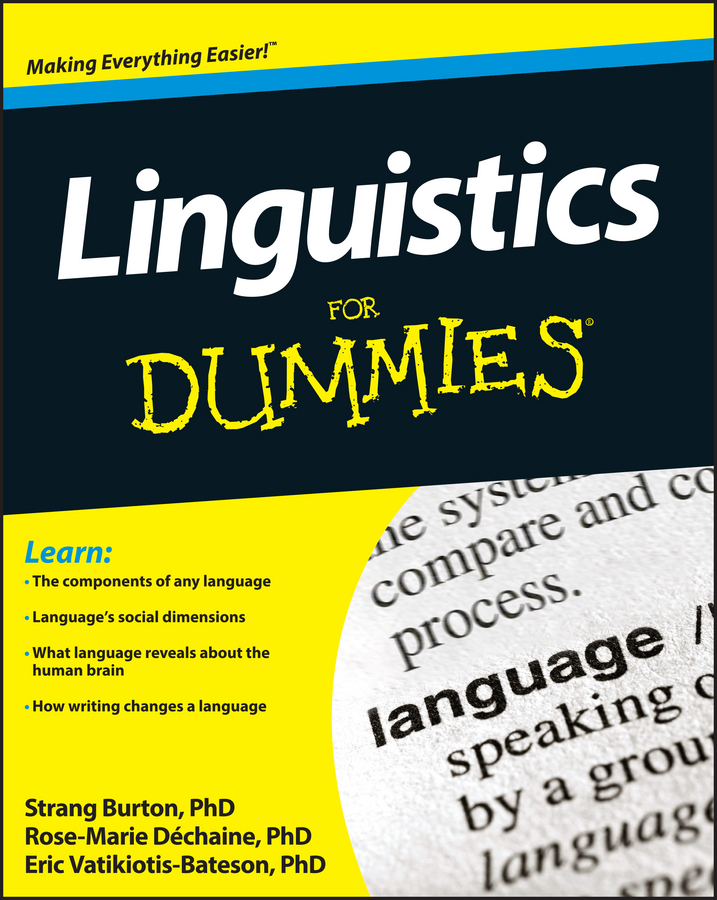 The fascinating, fun, and friendly way to understand the science behind human language

Linguistics is the scientific study of human language. Linguistics students study how languages are constructed, how they function, how they affect society, and how humans learn language. From understanding other languages to teaching computers to communicate, linguistics plays a vital role in society. Linguistics For Dummies tracks to a typical college-level introductory linguistics course and arms you with the confidence, knowledge, and know-how to score your highest.

If you're enrolled in an introductory linguistics course or simply have a love of human language, Linguistics For Dummies is your one-stop resource for unlocking the science of the spoken word.

Articles From Linguistics For Dummies

Linguistics is the scientific study of human language. Linguists gather information about sounds and sound patterns, about words and word patterns. They look at how words form sentences and how language is used to communicate. Linguists who focus on the form of language look at phonetics, phonology, morphology, and syntax. Linguists also look at how form changes over time (historical linguistics), compare the languages of the world to each other (language typology), and also compare writing systems (orthography). Many linguists look at how language connects to meaning (semantics and pragmatics), cognition (language acquisition, psycholinguistics, and neurolinguistics), and society (anthropological linguistics and sociolinguistics).

View Cheat Sheet
General (Linguistics) What Do Linguists Do?

If you’re into linguistics, it’s important to be familiar with the founding linguists. Here are some of the big thinkers — and some of their important ideas — from ancient times to today: Pāṇini (around the 5th century BCE): Not to be confused with the Italian word panini ‘sandwich’ — this guy is famous for developing the first comprehensive and scientific theory of grammar. His Sanskrit grammar is the first known attempt to provide a complete description of a language — he logged almost 4,000 rules! But more important than the individual rules was his analysis of how Sanskrit words are formed — Western linguists didn’t catch up with his work until the middle of the 20th century, when Noam Chomsky (check Noam out below) appeared on the scene. Aristotle (3rd century BCE): You may associate Aristotle more with philosophy, but he was also a great linguist! He lived in Greece and thought a lot about how words relate to their meanings. Aristotle developed a system of categories that continues to influence the way linguists approach the question of how language carries meaning. Ferdinand de Saussure (1857–1913): Credited with establishing modern linguistics, Saussure was one of the founders of structuralism. At a very young age, he applied principles of structural analysis to solve a problem concerning the reconstruction of the Indo-European language family. Saussure's great insight was that the relation between sound and meaning is arbitrary and that all languages are structured in a fundamentally similar fashion. His work had a huge impact on linguists in Europe and North America. Well-known European structuralists included Nikolay Trubetzkoy, Roman Jakobson, Louis Hjelmslev, and André Martinet. Well-known American structuralists included Leonard Bloomfield, Eugene Nida, Bernard Bloch, Charles Hockett, Zellig Harris, Kenneth Pike, and George Trager. Noam Chomsky (1928–…): Although well-known for his political views, Chomsky’s thinking on language has influenced not only linguistics, but also computer science, mathematics, and psychology. One of the most cited living scholars, Chomsky’s best known for the idea that knowledge of language — in particular the productive and creative aspects of language — can be modeled by a formal generative grammar that uses a finite rule system to generate an infinite set of sentences. He also proposed that some aspects of linguistic knowledge are innate — this is called universal grammar.

There are about 6,000 human languages currently spoken. You would think that would be enough, but some brave souls feel the need to make up new languages from scratch. These constructed languages are sometimes called conlang and are especially popular in fantasy and science fiction writing and moviemaking. How does linguistics fit into this? Well, language inventors need to know the principles of linguistic analysis to build such languages. Here are some of the more famous ones: Esperanto was invented in the late 1800s by Ludwig Zamenhof to foster harmony between people of different countries. It’s the most widely spoken constructed language in the world and is used in more than 100 countries. Esperanto is based on western Indo-European languages — the sound system is mostly Slavic, the vocabulary is mostly Romance and Germanic. It’s been used as a background language in the movies Gattaca and Red Dwarf, it features in a conversation in Blade: Trinity, and is even used as the main language in the horror movie Incubus. Klingon is the language of the Klingons, used in the Star Trek movie series. The Klingon language was developed by Marc Okrand, a linguist who previously worked with Native American languages. Klingon has a complete grammar and vocabulary — books have been translated into Klingon, and you can select Klingon as your language of choice in Google. Nadsat is a fictional language variety used by teenagers in the novel A Clockwork Orange by Anthony Burgess. It’s a form of Russian-influenced English — the name of the language comes from the Russian suffix -nadstat’ which is the equivalent of English ‘teen’. For example, Nadsat viddy ‘to see’ comes from the Russian vidyet ‘to see’ and Nadsat zoobies ‘teeth’ comes from the Russian zubi ‘teeth’. Newspeak is a form of English used in the novel 1984 by George Orwell. It’s a deliberately simplified language that has no negative words (good is a Newspeak word but not bad), reduces everything to a simple dichotomy between goodthink and ungoodthink, and has a deliberately small vocabulary and short syllables with a staccato rhythm. Examples of Newspeak words are ungood for ‘bad’, plusgood for ‘great’, doubleplusgood for ‘excellent’, doublethink for ‘accepting as correct two mutually contradictory beliefs’, and Ingsoc for ‘English socialism’. (Some aspects of Newspeak are modeled on Esperanto.)

The problems posed by linguistics can make you notice really cool things about language. You’ve probably asked yourself these questions without even realizing that they’re linguistic questions. Why is learning a second language so difficult? Why do French and English have so many words in common? Why do dialects exist? Why can’t all the sentences of a language be listed? Why doesn’t everyone speak the same language? Why is it possible to translate from one language to another? Why do some conversations get off-track? Why is it harder to understand someone when you talk on the phone? Why isn’t sign language just a matter of making pictures with your hands? Why are some speech sounds more difficult to produce and perceive than others?