The Seven Main Modes (Scales) for the Bass Guitar 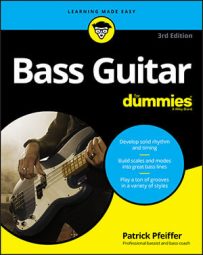 With all these scales at your fingertips, you get more choices in terms of flavor, or color, when playing your bass guitar. Or you can think of it as starting with the same basic cooking recipe but adding different flavors (different sounds) to change it slightly.

In almost every song, one mode predominates. (Mode is simply a fancy word for scale.) When you play with other musicians, the first song may be primarily dominant, the next minor, and the next major. Know the mode you’re in, and you’ll be well on your way to providing great bass lines for any song.

You can hear all seven main scales in Chapter 5, Audio Track 15 and also the chord they relate to. And you can also see these scales played in Chapter 5, Video Clip 7. Notice how the major and minor chords each have more than one possible matching scale.

The modes are easy to understand when you know their origin.

Even though D Dorian has the same notes as C Ionian, it sounds different — somewhat sad. A tune based on D Dorian also will sound sad.

If you start and end on the 3rd note of the C major scale (E), you end up with the E Phrygian mode (E, F, G, A, B, C, D, and E). You hear a sound that’s different from the Ionian and Dorian modes, even though the notes are the same. It sounds somewhat exotic.

If you start and end on the 4th note of the C major scale (F), you get the F Lydian mode (F, G, A, B, C, D, E, and F). This mode produces a sound that’s somewhat similar to the sound made by the Ionian mode — major and happy.

As you can see, each mode starts on a different note of the C scale but uses the same notes. Also notice that each of these modes has its own triad and 7th chord — the 1, 3, 5, and also the 7 — and each chord sounds uniquely like the mode it’s related to.

The common order of these modes is: Ionian, Dorian, Phrygian, Lydian, Mixolydian, Aeolian, and Locrian. Sounds Greek to you, you say? Well, it actually is!

This position is referred to — playing without shifting the left hand — as the box because the notes fit into a boxlike pattern on the fingerboard (or look like a box on the grid). When you play a groove, you want to keep the pattern within the box as much as possible so your playing is smooth and efficient.

Practice each of these seven modes (scales) on your bass and listen carefully for the unique sound that each one produces.

Most bass lines are made up primarily of notes from the scales and chords.